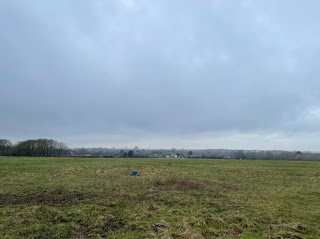 Jury service yesterday was shorter than I (or the court!) expected. After a minor drama on the way there - when I got as far as the big roundabout outside town and THEN realised my phone was still sitting at home - cue a circuit of the roundabout and a lightning dash back to collect it (it wasn’t “no phone” that concerned me so much - more that it was to be my navigation aid at the other end for finding the court from the car park, and also of course has the NHS Covid-19 tracking app on it...) I arrived just before 9am as requested. The first day is always an earlier start - with time being needed for induction etc. I was pleasantly surprised how familiar everything  felt - including the jury officer who turned out to be the same lovely lady I had as my JO when I served first time round, some 14 years ago! Introductory stuff all completed, we settled down to a bit of the usual preliminary “getting to know one another” chat that occurs, albeit in smaller groups as 18 people spread out over a quite large room does not an easy conversation make! We’d been told that a case was just going in, and that we would be linking to the courtroom for jury selection shortly, however, at just after 10.30am it all fell apart, and the case was dismissed, so no jury requirement! Due to Covid restrictions currently when that happens there is not another case waiting to follow on, so that was us done for the day!

I headed home, via a stop at the Lidl I pass on the way - FAR quieter than our Harlow store has EVER been I think - I’ve been avoiding our local store like the plague because, well, the plague, basically! Nice to have a bit of a wander around a different store - got the bits I had gone in for (bread flour and Greek yogurt mostly) and then a few other odds and ends where those items double up with Aldi’s equivalent- that will save me a trip there any time soon as well! Also a few tempting looking goodies - that’s the thing with Lidl, isn’t it! 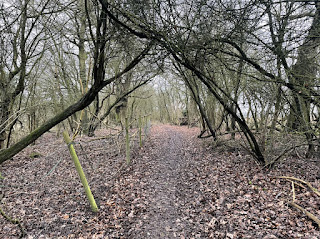 After lunch I decided to head out for a walk - and with the fancy to go somewhere a bit different to the routes we usually take on weekdays, I headed for the Common - it was still a bit musty and murky for the really stunning view but it still felt great to be high up, and with a good view over the town. From there it was across the motorway (a surprising amount of apparently essential traffic, for a lockdown!) and then along the footpath which leads through the small area of woodland above, then round a field edge. Now, the Common was muddy, but mostly in a “ahh look at this lovely puddle of muddy sludge that’s going to spray all over my jeans as I walk through it” kind of way. The field edge, however, was something quite different... 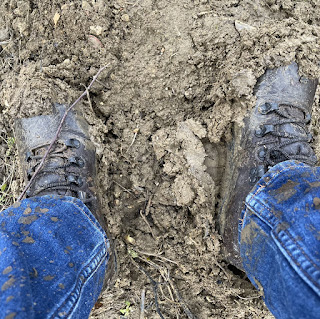 This entire area is on the edge of the basin of clay which London is built on, which means when it’s dry, you have a very solid base to walk or run on - almost concrete like at times. When it’s wet though, it sticks to your boots. A LOT.  At one stage I’d picked up so much of the stuff (the field edge section of path is only about a quarter of a mile, too!) that I was struggling to lift my feet - there must have been a good few kilos of clay weighing down each leg - an unexpected strength training benefit, I guess! 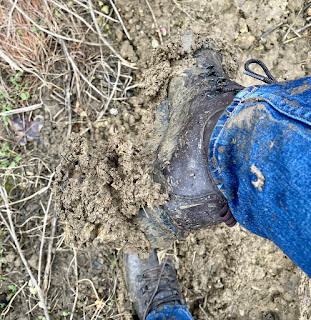 Those jeans had been clean on when I left the house by the way - unsurprisingly they are now in the washing machine! Once back over the M11 via the foot bridge, it’s made up paths or pavements all the way home, and at regular intervals for those final 2.5 miles or so back I was stopping at every lush-enough looking clump of grass to try to wipe yet more of the clinging, sticky mud off my boots. I wasn’t altogether successful - next time they are worn I really must remember to put them on at the doorstep!
Not entirely the day I was expecting, but nice enough all the same!
Robyn
Posted by Robyn at 5:11 pm

Email ThisBlogThis!Share to TwitterShare to FacebookShare to Pinterest
Labels: Me, Walking