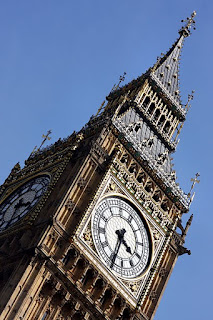 ....really, it's not! In fact it's St Stephens Tower at the Palace of Westminster - inside which you will find the bell commonly known as, yes, Big Ben!

I found myself in London for an afternoon recently - camera in hand and with time to kill. I'd asked for - and been set - some photo-challenges by some online pals, so some of these results of those may well make it on here sometime soon, but while around Westminster (Having taken "A photo with exactly five people in it" - thanks for that one Jenni!) I decided to try to get some shots showing the sheer level of detail in the fantastic buildings, not least the tower above. It's not easy to see in the picture above because of the size but around the top of the tower, above the clock face are the emblems of England, Scotland and Wales. I presume there is one for Ireland too but I didn't recognise any of them as being so.

I associate wandering around in Central London very strongly with my Nan who died in 1993. From when I was very small she often used to take me out in and around London - we went all over, the Zoo was a favourite, especially in winter, as well as all the parks, the museums of course, and even Heathrow Airport where I remember seeing Concorde coming in to land! (Ungainly beast she was on the ground too, but in the air, oh wow!). In her later years Nan suffered from Altzheimers Disease - but not that long before she died we had one last trip out into London as I took her to the zoo for the day! We had a fantastic day - sometimes something like that, which taps into the part of the brain which holds the long term memories, can be ideal for someone suffering from Dementia as it's the short-term memory that is more severely affected by the disease so something that is almost like going back in time doesn't cause the distress and frustration that comes with not being able to remember the day to day routine stuff. We went to see all our old favourites - the elephants, big cats of course - the tigers were always Nan's favourites - and the penguins, still at that stage in the fantastic 1934 pool. We travelled there and back by our old route - tube to Camden Town and then (Nan reminded me as we came out of the tube!) bus 74 to Regents Park, then a walk across the canal bridge and up the road to the Zoo entrance. It was a very special day - one which Nan cleary enjoyed greatly, and I am extremely proud to have given her that day in return for all the fantastic days and memories she gave me.