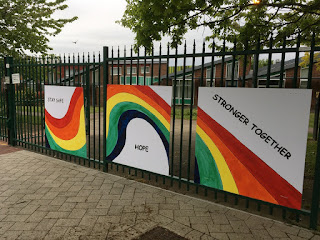 We walked another section of sculpture trail this afternoon - that now just leaves the longest section of the trail - which is also the furthest from home being right over the other side of town - plus the pieces that are tucked away inside various buildings, which we can obviously not access at the moment.

Something that we have been noticing as you wander round the town is the bits of artwork being done by those children of keyworkers who are still in school - about 50% of the local schools have rainbows and messages pinned to their railings outside. Lovely to see, and so much work has gone into them!

As well as our walk we took the chance today to give the garage a good clear out. It’s needed it for a while - and as we had been given the chance to acquire a new storage unit the perfect size to fit across one end from some neighbours who wanted rid of it, it seemed the perfect time to crack on with it. All our stored up jars were sorted through and about a third went to the recycling bin for various reasons. Some bits and bobs left over from when the kitchen was done were sorted out - some for keeping, like the slab of stone worktop that was cut the wrong size, and some for throwing away, like half a bag of plaster, and some cement-encrusted buckets left behind by the builders. I googled to find out whether grout goes off in its bag, found out that it did, and we threw that out too. The big thing was my bike though - I have spent the last few years constantly saying that I either needed to start cycling regularly again or just get rid of the bike - and looking at it today, not only would it have needed two new tyres, but also the gearing system needed some serious work too, so I decided it was time to let it go. The same neighbours who gave us the storage unit have now said that if I do get the urge to cycle somewhere I can use one of their bikes too, and if I really get the bug for it back again I will just buy a new one myself - for now though we gain valuable space in the garage, and I will no longer be feeling “nagged” every time I see it sitting there!

I plan for this week to be more structured - I already have a list for tomorrow, and aim to start rebuilding some good habits in anticipation that at some stage before too much longer we will be getting back to some sort of normality. So for now I will finish my day with a short stretching session, sort out clothes for the morning, and then get to bed at a sensible time. Goodnight!