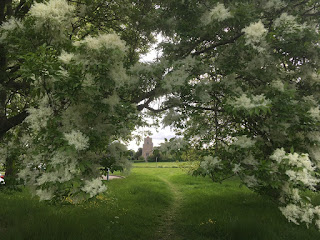 Ugh. As a couple of pals of mine would say, I have had a full price ticket for the struggle-bus for the last few days. I think lots of things cumulatively have contributed. Strangely enough I find the end of a weekend tougher at the moment than I would in “real life” - usually I have a job I enjoy, colleagues I (mostly!) get on with, and going in to the office on a Monday generally doesn’t feel like that much of a wrench. At the moment though Mondays signify MrEH getting back to a degree of normality with work, while I’m left floating around trying to find things to fill my time - but only things which don’t make a noise as he may have conference calls. If he was working at home in any other circumstances I would go out and have a walk or a run - but that’s not an option at the moment, and there is a limited number of hours in each day I can spend processing old photos, so what has tended to happen is an increased amount of time spent on social media of various sorts, and as I alluded to in my post last night, that has been getting increasingly stressful in itself. (I do appreciate that I’m still extraordinarily privileged in plenty of ways, by the way, but privilege is no bar to mental health issues, sadly, so if you are unable to appreciate that, please take your eyes elsewhere.)

At the beginning of the COVID-19  outbreak with people being somewhat shell shocked by the whole thing, the vast majority set aside their combative stance over such things as party politics, as it became apparent that the country needed to pull together to keep morale as high as possible. Indeed even politicians themselves resisted the worst of the spiteful backbiting that all so often peppers their engagement. As time has gone on though, things have begun to slip back to a pre-covid “normal”, and the nastiness has crept back, the malicious intent to divide has resurfaced.  On Sunday evening this escalated - as I talked about yesterday - and my anxiety sky-rocketed as a result as it became increasingly difficult to get away from it all.

My usual method of dealing with this level of anxiety and the “Black dog” appearing on the horizon is of course to go for a run - but with the adjustment in the lockdown restrictions not kicking in until today that hasn’t been an option. So far in the past 50 days I have been for a second form of exercise in one day only once, when I felt that things inside my head were escalating so fast that it was a solid reason to do so, so I was keen to only do that if I felt as absolutely had to. Our morning walks are important for MrEH’s mental health too, so I have been reluctant to sacrifice those.

Waking up this morning and knowing that if I wanted to, I could walk and run in a single day - and then go for another walk later if I wanted! - felt quite astonishingly liberating, and the 4 partly sunny, partly cloudy, slightly breezy, sometimes too warm and sometimes a bit chilly mostly off-road miles I did just before lunch were both exactly what I needed and a great reminder of precisely why it is that conscious movement can be so good for mental health. I also made a decision this morning to really limit my social media use for a few days, then reintroduce it gradually, so I have turned notifications off, disabled WhatsApp for a bit as a I was simply getting too many group notifications at some points in time (and am using the iPad not the phone as the iPad doesn’t even have WA on it) removed the Twitter app from the front screen on the iPad, and will be using other platforms sparingly as well - checking a specific group on FaceBook where I am an admin, and keeping an eye on things on the CAMRA forum for example. Instagram I am keeping - it generally feels like a really “safe space” for me as there is mostly not the unpleasantness on there that other platforms often attract. I’ll be continuing to post here too, and browse other blogs. I’ll review how I am feeling in a few days, and decide what to reintroduce and to what level. I’ve referred to “anti-social-media” before - and sometimes it really is!

Email ThisBlogThis!Share to TwitterShare to FacebookShare to Pinterest
Labels: COVID19, Home, Me