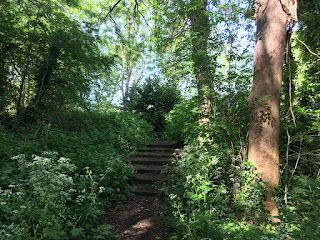 The photo above was taken on our walk back from Sainsbury’s this morning - we staged a dawn raid (well, ok, not quite dawn, but what counts for it in our world!) to see if we could track down any more bread flour having only managed to get that small bag of granary yesterday - and hallelujah there on the shelf was WHITE bread flour! We managed to get a bag of ordinary strong white each for us and my parents, and also a single bag of more expensive organic flour as I’d ideally like to continue to use that for sourdough. We will not be short of the ability to make loaves or rolls for a few more weeks now, and indeed might even splash out on pizza dough over the weekend, too!

The majority of today was taken up with more long overdue jobs outside - mainly removing the paint so shoddily applied by the so called professionals employed by the freeholder of our block when the major works were done 10 years ago. A good amount of the paint had already made its way off the walls, and when we started removing the rest, we realised why as it appears that virtually no preparation had been done. Hopefully our efforts will stay on the wall rather better as we have removed all the loose paint underneath, sanded over the entire area to give the new paint something to adhere to, and wiped down to rid it of dust and paint residue. The first coat of new paint went on last thing this afternoon and already it looks SO much cleaner and brighter out there! We’ve also sorted out some more rubbish from out there to throw away, and found more odds and ends that can head off for storage in the garage too - that will be a job for tomorrow though.

Right - I’m off to start this weekend’s jigsaw. Just remember that tomorrow, which is a Friday, is a Bank Holiday Monday though won’t you....!