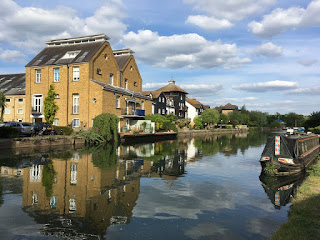 We escaped! The first time either of us have left the town since 23rd of March when the lockdown started - and the first time we’ve used a car for anything other than shopping that we could not carry home ourselves too. We’d originally planned to stay local and on foot this weekend, fearing that everywhere would be madly busy, and indeed as we headed out the roads certainly had a lot more traffic...thankfully by the time we reached Amwell, a Wildlife Trust reserve about 15 minutes drive away, it became apparent that wherever all those cars were headed, it wasn’t there! A lovely walk along the canal to Ware and back, and some time at the bird viewpoint as well, seeing our first Hobby, Common Terns and Little Ringed Plover of the year.

Today also saw my third experiment with sourdough bread - technically started yesterday with the process of making the “sponge” using starter, flour and water, and the several short proves and kncokbacks. The dough was then left to fully prove overnight. I did a few things differently this time - an extra tablespoon of starter in the sponge, and a shorter final overnight prove with the dough sitting in a flour dusted cloth lined bowl. This morning I threw the proved loaf into a blazing hot oven first thing, turned it down 10 minutes later, and then went off to do my parents shopping for them leaving MrEH to remove the loaf from the oven when done... 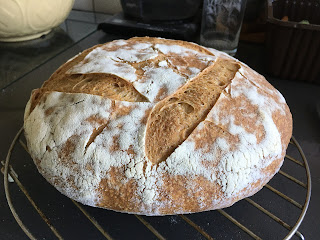 ...looks good eh? It tastes the part too  - a good chewy crust and that distinctive sourdough “tang” - although the internal texture of this one is a little denser than a typical sourdough should be, I’m less concerned about that when it tastes as good as it does! We’ll keep going anyway - at the moment I’m aiming to feed the starter once a week, a couple of days before I bake, and then keep experimenting with small differences in the method informed by researching the results from the previous bake. It’s no real hardship as far as I am concerned having fresh sourdough weekly!