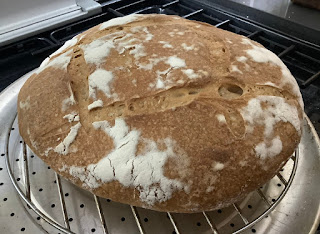 Technically with MrEH’s current 3-day week status and me being furloughed, today was the first day of our weekend. However, we’re trying to keep Thursdays (and to a degree, Fridays too) as a productive sort of day, where we aim to get things done, rather than just sort of frittering the time away as it would be so easy to do. Make no mistake, we are factoring in some full-on downtime during the actual weekends, with lots of time for just relaxing, reading or just sitting and thinking.

Todays main missions were a big stock up shop, using the car - for the most part we’re still shopping on foot several times a week, but every few weeks heavier stuff needs buying so I take the car. And some more work in our tiny patch of garden, including cutting down a conifer which has been there longer than we’ve owned the place! We’ve spent years on and off talking about removing it, trying to find ways of making it more manageable, failing, and watching it get bigger and bigger, and finally today we decided it was time to tackle it. Took us a few hours, a saw a fair few years older than I am, and quite a lot of elbow grease, but it’s down. We also took the time to dig over the area around the stump, including getting rid of the roots of some of the original planting from when the flats were built in the 1950’s, and in the process realised that when our predecessor set out bricks to create the border, he nicked a good foot of space from next door too! The bricks have now been re-aligned, handing back that space - and we’ve started thinking about what we might plant in our newly claimed space!

I have also been through the sourdough making process again today - in fact, as we speak, the flat smells deliciously of baking bread! Although the process itself is quite time consuming - it was actually started last night, with the “sponge” being left to develop overnight - it is also very simple, the bread is simply flour, water and salt, time does the rest. Today I made the dough, which then gets left to rise for an hour before being brought out, pushed flat again, reformed into a round and popped back for another hour in a warm place. This step is repeated several times before the dough gets left for it’s final prove - anything from 4 hours to overnight - today it got about 6 and a half hours. Then into a blazing hot oven for the first 10 minutes - turned down to a lower heat for the remainder of the cooking time, but how much lower depends on the progress after those first 10 minutes, and that progress isn’t always the same! Anyway, all being well, you end up with something that looks a little like the picture at the top...!