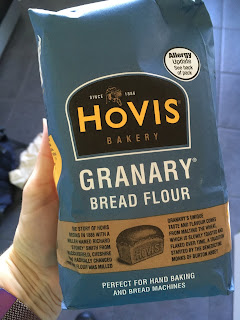 Well, this was today's excitement - and exciting it really was as this was the first bag of bread flour I have seen in a supermarket for several months! It was also the only bag on the shelf, so I grabbed it quickly, and covered it up in the trolley "just in case" - well you can't be too careful!

In other bread adventures I baked my second sourdough effort this morning - having tried an ultra-long prove to see what would happen. In an ideal world I would have gone for simply "overnight" rather than what it ended up as which was about 12 hours, and indeed this one didn't rise upwards as far as the first one - the texture is better though, especially the crust which has that perfect sourdough chewiness to it, there are plenty of airholes, and it tastes great so we're happy with it. I think part of the problem was the way I proved it - it sweated a little and stuck slightly to the non stick mat I had placed it on and so was pulled out flatter when I came to move it on to the hot baking tray. Experimentation will continue - well, while I still have flour anyway!

There is more baking planned for the next few days too - I got some Clotted Cream a few days ago so want to make scones again, and will also probably make something more traditionally "cakey" for the weekend as well - although I've not decided what yet. I'm really enjoying playing about with a few different recipes at the moment though - I've not baked so much in years and had forgotten how much I really do enjoy it, especially when I find easy recipes like last weekend's raspberry muffin loaf cake - actually easier than making muffins as you don't have the faff with filling the cases!