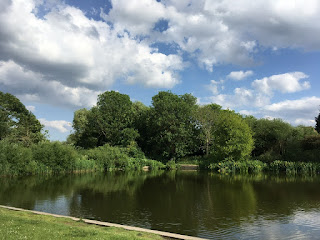 Another hot day for a run, but another 4 very slow run/walk miles done. I’m finding running really tough at the moment - the heat is always a nightmare for me anyway, it plays hell with my breathing plus I overheat ridiculously fast as well. I need to get out there and do more of it, is the first thing - and that will help acclimatise me again. I also need to regain my confidence in my ability I think - and that’s the bit I’m not sure about how to address. I still love it,  but at the moment it doesn’t seem to love me. Might try an early morning river run one day and see if that fixes things - it often does.

At roughly the time I was running this afternoon, 20 years ago I was getting married. Yes - our 20th anniversary, intended to be spent mostly on a beach in the Hebrides, with a nice meal and a few drinks this evening, hopefully while enjoying a stunning sunset. Instead, MrEH spent the day working, we’re planning an Indian takeaway for Friday night, and the drinks have been deferred at least until tomorrow. The weather today was certainly more than a bit different from 27th May 2000 - then we had a bit of everything - from bright sunshine to torrential rain, thunder, lightning and a hailstorm (with a rainbow to follow!). It was also distinctly windy - and as a result my veil is either standing on end in most of the photos, or being firmly held down behind my back by whoever was next to me! While today may not have been quite the day we had planned, we’ve been together, there have been lots of nice memories, and well-wishes from some of those closest to us - and those, after all, are the important things.