A day of peaceful walks and high drama! 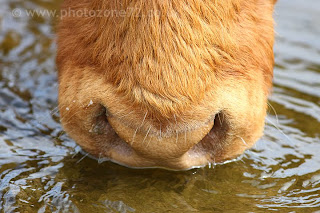 Well not quite the bird I said you might get, but wildlife, of a sort! This cow was drinking from a puddle at Balranald RSPB reserve earlier today. I had the long lens on the camera and didn't want to change over to a standard zoom, so had to think laterally! There is one of it's eye too - you may get that in due course if I end up with a photo free day!

That was the peaceful walk - a lovely stroll around Balranald earlier on. It's a fantastic reserve with "a bit of everything" - the machair, (google it!) beaches, rocky coastlines etc - and is by far one of our favourite walks when we are here - we will almost certainly go back at least once more yet, maybe more. We followed that with lunch at the Claddach Kirkibost centre (fab lunches!) before calling into the Westford Inn to see Alastair & Elisabeth. The pub has been closed for refurbishment over the winter and my goodness have they done a lot of work to it! It looks fantastic, and will be reopening on Friday this week as - as Elisabeth says - "just the sort of pub that WE would like to visit!" Hurrah! Hopefully the fantastic pub sign will be going up at the end of the week too - as and when it does I will definitely put a picture on here!

Once we finally got back to the cottage I chucked a chicken in the oven for dinner before we headed off for a wander to the roadend, as Ben missed out on a stroll up there the other night and we were hoping to see the otters again. On getting there there was no sign of otters, but we decided to continue walking to check out the stepping-stones which form part of a walk we are considering for later in our stay. They are about a mile past the road end, we had no map but as we knew the path we didn't worry too much. Once we were a few hundred yards short, but still out of sight of the loch the stones cross, we could see people on the other side presumably about to head back, so almost turned back as we figured that they were definitely passable....but decided to continue because as Ben said, it would be nice to see HOW passable. The answer was clearly "Reasonably, but only at low or medium tide - not the high spring tides we have these few days, as the party of walkers (several adults and about 6 kids) were firmly trapped on the other side. On seeing us one of the chaps with their party asked if we knew of a bridge, to which we responded that there wasn't one - nor was there any other reasonable route for getting back to the road. We estimated that it was going to be a good several hours before the tide abated enough for them to cross - the children were already getting cold and frightened and the chap we were talking with was starting to talk about wading across.....we hastily urged him to under no circumstances even try, as the current flows so swiftly there on an incoming tide there would be no chance of making it over without getting swept away. With only an hour or so of daylight left we decided there was no time to lose and pegged it back to the road-end where there is a phone signal, and called through to Stornoway Police who alerted the coastguards. At time of writing (two hours later) the three coastguard vehicles have just returned up the road, followed by the three cars belonging to those who were in trouble, so it's reassuring to see that all has ended well. Us? We're having a well deserved beer!