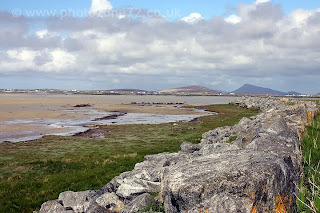 This is the "South Ford" between South Uist and Benbecula. We sat and ate our lunch today and looked out across the ford, as you can see it was a gorgeous afternoon again (this morning wasn't quite so cheery but as it brightened up so nicely we'll forgive that) and there were people out on the ford walking dogs, or just walking. It wasn't until 1942 that, if you wanted to cross from one island to the other you had no choice BUT to walk, as it wasn't until then that any form of crossing was put into place! Now the causeways are commonplace - the longest being the North Ford Causeway beween Benbecula and North Uist, via Grimsay, however it took nearly another 20 years for that one to be built. Prior to that you could, at high tide, take a boat from Carinish to Gramisdale, or at low tide in good weather the crossing could be made on foot with the assistance of an experienced guide - however there was 4 miles to cross, and was only open for one hour each side of low tide!

The most recent causeway to be built links Eriskay to South Uist, and was only completed in 2002 - isn't it incredible to think that prior to then, this fairly well populated island was entirely reliant on a ferry service. Thanks to the "Spinal Route" consisting of roads, causeways, bridges and ferries (Crossing the Sound of Harris and between Eriskay and Barra) it is now possible to travel by car in a single day from Ness at the North of Lewis, down to Vatersay to the south of Barra. We think little of popping down to Balivanich on Benbecula for diesel as we did today (although when we got there, at 154.0 per litre we thought a bit more!) and it's incredible to believe that relatively little time ago that simply wasnlt an option.