Today was yet another fine day (unheard of! All this good weather coming at once! It'll be a terrible summer now, you mark my words!) so we set off for a walk that Ben has been talking about for quite some time, and I was viewing with a level of trepidation. You will already have guessed that a hill is involved I'm sure - this time it was North Lee - one of the higher hills on the island.

So - todays blog (which should have been yesterdays, but we were busy yesterday evening so it didn't get done!) is a multiple picture one showing some of the views on the walk in, and way up, plus a shot or two of the incredible views from the top.

This is the view from where we started. North Lee is on the left (we climbed to the highest point on the ridge on the left of the hill - this gives the best views and that was what we'd climbed for, so there seemed little point in going on to the "real" summit! Plus, we were shattered by then!) The hill to the right of it is South Lee. 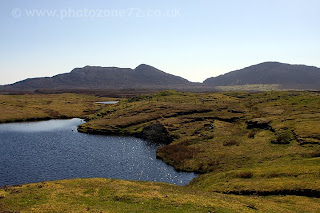 This was marked on the OS Map as a "Sheepfold" and is basically a stone walled enclosure where I presume the sheep can be safely held in case of poor weather, or lambing, or simply checking them over. It appears to be unused now. You will notice the hill peeping at us over the top "I'm still here you know!" 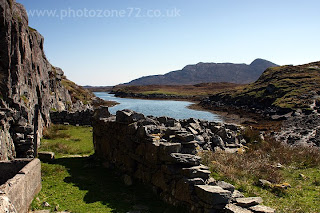 Lochmaddy Village from the foot of the hill - you can see the Calmac Ferry Pier in the foreground, and the village stretching off behind. Lochmaddy is nominally the "Main" vilage on North Uist - but there isn't an awful lot there! A couple of hotels, a shop, an arts/community centre which also houses a cafe and Post Office, and some houses. And the ferry terminal of course, which is really the main reason for the Village being as large as it is. 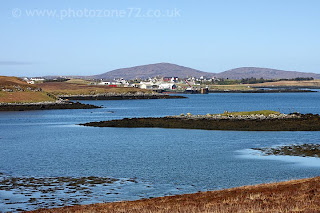 So - the climb begins. This next shot shows the view across to Lochmaddy again from around half way up. Already it was beginning to be apparent just HOW god the views were going to be from the top - by this stage my legs were screaming and I was beginning to get distinctly short of puff, but there was no way I was giving up! 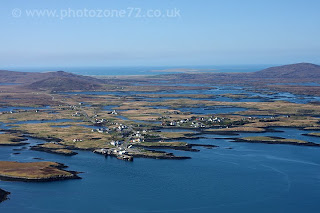 The Top! At this point, as well as Calmac Ferry MV Hebrides (Also blogged recently by Donnie McKay over at HIS HEBPHOTO BLOG although in a slightly different surrounding!) we could see across to Skye behind us, and over the Berneray and Harris to our front and right. The rest of the chain of Islands making up the Uists stretched off to the front and left. More "view" pictures will make it to my Webshots album in the next few days I'm sure. 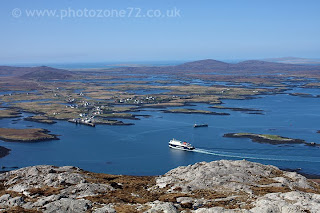 "And, finally..." as they say on the news, MV Hebrides safely in to the pier and getting ready to disembark what looked like a full load of cars as well as a few commercials. We could hear the tannoy announcements on board quite clearly and it was very strange to be sitting up a hill listening to announcements telling all drivers and passengers of cars on the main deck only to please return to your vehicles! 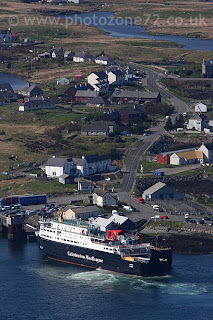 The views were phenomenal. The climb, and the walk, were extremely tough going. We reckoned the distance there and back at about 8 miles, but it's the terrain that makes it such hard going, there is never a straight route to be taken and even on the hill itself you constantly find your path blocked by a boggy patch just TOO wet to pick your way through, or a sheer rocky drop that has to be got around. Would I do it again? Yep, probably!

The wind has now come up again - and we are shortly off to the Westford to help Elisabeth & Alastair getting ready for their re-opening later today. There are handpump problems, which coincidentally are right up our street....!

ps: Oh, I'm sorry, the glove? You want to know about the glove? Ahh, well, I have a problem at the moment with one of my gloves trying to escape. It constantly makes its way from my left hand coat pocket to head off and find adventure. On this occasion we thought it lost forever as it was lost "somewhere" on the walk in to the hill. We must have done a god job retracing our steps though as on the way back, suddenly, just to our left a small fluffy purple dot was spotted - and there it was! The silly thing was snuggled safely back in the pocket and zipped in, just in case it hadn't had enough adventure for the one day you know!
Posted by Robyn at 10:03 am