There's been a lot of chat online recently about FoodBanks. Sad as it seems, we're now in a situation where a lot of folk have to rely on these, and they provide a hugely valuable service. When we were struggling massively some years ago they didn't exist so far as I know, and had they I probably wouldn't have felt that we had the "right" to use one in any case - at the time the £10 a week we had to feed the two of us for a while never actually seemed that restrictive, but that was a good part because we had easy access to a superb market with fruit and veg stalls and an excellent butchers, and Indian supermarkets, plus we have the basic cooking skills to be able to make the best use of what our limited budget allowed.

We took up the challenge to spend £3 and buy goods for our local Foodbank recently - and do you know, I found it really difficult. The first problem was that a lot of the stuff that the FoodBanks list on their "most wanted" list is stuff that - even when we were on that super-tight budget, we would never in a million years have thought of buying - tinned steamed puddings for example, and tinned rice puddings - had we wanted either of those things we would have bought the ingredients that would have enabled us to make them (and many more portions of them) from scratch. I repeat though - we have the skills to do that - far too many of those now relying on Foodbank donations are doing so because they don't have even the most basic cooking skills, and thus are forced to rely on eating what can best be described as processed cr*p, which costs more than cooking good basic food from scratch, and so the cycle continues.... 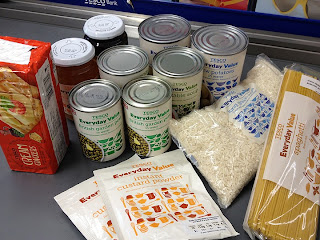 We settled for keeping it fairly simple in the end - some basic carbs - tinned potatoes, pasta & rice. Tinned vegetable soup. Cream crackers which will go with either the soup or the Jam & Marmalade we also bought. Tinned peas. Yes, I know what I said previously about tinned -v- frozen, and I stand by that, but frozen goods aren't a lot of good to Foodbanks, are they now! Finally we added a couple of sachets of instant custard mix - the sort which you make up with boiling water. The whole lot came to £2.96 - which was worryingly cheap - and looking over the bagful of goods the main word which sprang to mind was "bland". The rice & pasta were from the supermarket's budget range and I buy both of these myself - 40p a kilo for the rice, 19p for 500g of spaghetti. That takes the price for a single of portion of either to under 4p which is achievable on even the tightest budget and of course starchy carbs are filling - important when you have limited funds to feed a family. It struck me that a tin of peas and some cooked rice or broken-up spaghetti stirred into one of those cans of soup could make a filling meal for 2 people for 25p a head plus cooking costs. It wouldn't be terribly interesting, but when you're struggling to make ends meet to that extent, "interesting" is the least of your concerns. 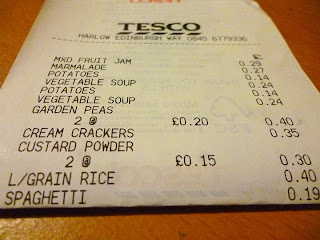 While as I said, the Foodbanks provide a valuable resource for those for whom the light at the end of the tunnel is nearly extinguished, as a long term solution is pretty hopeless. The only true way of solving the issue of people struggling to this extent is to start providing free-of-charge basic cooking skills courses, and over the longer term ensuring that these basic skills are taught to children in schools. The free courses could be offered hand-in-hand with boxes from the Foodbank - and also would fit well with some interaction between Foodbanks and service users - those with better cooking skills would find it helpful to get boxes containing more "ingredients" than convenience foods, for example.  Teach people how to make things like Porridge, basic vegetable curry, bolognese or chilli, basic unleavened flatbreads. Soups of course are a great one - easy, cheap & filling. Teach about the advantages of buying in bulk when funds are available to do so. Teach about buying seasonally, about not assuming that farm shops are more expensive than your local branch of "that" supermarket. The phrase "Give a man a fish and you feed him for a day, Teach a man to fish and you feed him for a lifetime" certainly has some truth here. Sadly I couldn't find any evidence of any such free courses being available in my area, although I have seen online that others have mentioned that this resource is being offered by their local Foodbanks.

Have you joined in with the current drive to increase donations to Foodbanks? If you haven't, and want to, then visit This Website to find your local one, and how to give. If you have, what did you settle on buying and what were your reasons for your choices? Do you know if there are free basic cookery skills offered by anyone in your local area?

Every word of that is true and it is so sad that so many people don't have cooking skills.

I know someone, from a hard working family who has nostalgia for a meal he had often as a child.

A bought (and cheap) meat and potato pie, served in a bowl with canned soup.

Your post was very true; as Pat said it is very sad that people do not have basic cooking skills. Unfortunately, whilst it is true that they are not offered by any of these agencies, the people themselves do not want to put the work in themselves. My daughter is a case in point - she buys so much convenience food, despite having two very young children and no work commitments. This does sound harsh, but I have tried to encourage her to cook, bought very basic books and passed on tips and recipes, but to no avail. I did not have one cooking lesson when I was young, and my mother did not teach me as "I was hopeless in the kitchen" so my sister was her pupil. However, (maybe because I am so bloody minded, or just because I needed and wanted to) I taught myself by reading books, magazines and latterly internet resources and can now make something edible out of fairly basic ingredients. I am now very lucky that I do not have to just provide sustainance, so we can indulge ourselves now and again, but will always retain the ability to cook using basic ingredients.

I think it's fair to say that of some of those folks who use the foodbanks - but suspect it's far from all. The best thing of all is once people are persuaded to start cooking from scratch for themselves they rapidly realise that they know longer like the taste of the "ready meals" that they used to buy so happily - most find them way too salty, for a start!
That ability to cook healthy, nutritiously balanced food, using budget ingredients, is priceless though, and it makes me very sad that so many folk can't do this.