We're back to trying to keep our grocery spend down and rebuilding the credit in our Clubcard Plus account after our holiday. We're also trying to use up the accumulation of foodstuffs in our storecupboard, freezer and larder - which of course will help with the "keeping the spends down" thing too! 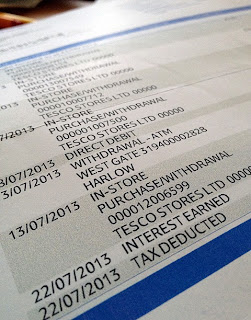 Before I went shopping for this week I thought about what we had available already, and also what we wanted to eat this week. With the hot weather we've been having we tend to eat a fair amount of salad - MrEH is a proper bloke though and doesn't consider a salad to be a meal if it's just leaves and similar so I have to box clever and tart it up a bit - a warm salad with some form of cheese, some bacon and some boiled new potatoes is a particular favourite. Chorizo is great for this sort of salad - you only need the tiniest bit to add masses of flavour and croutons of stale bread fried off in the fat that comes out of the chorizo are a fabulous addition too.

You often hear people complaining that it's too expensive to eat lots of fresh fruit and veg - that they "can't afford" to eat that sort of food. Really? Our shopping last week - having checked on what we needed before I went, and made a list - cost £10.53. This included milk for both of us (MrEH will go through his 4pint container in the week, while mine will last at least a fortnight), a lump of "feta style" cheese which serves as the "main ingredient" in 2 evening meal salads for both of us, lots of salad leaves and lettuce, a huge bag of red & yellow peppers, spring onions, plus bananas, apples and nectarines for after our lunches. There was also a punnet of mushrooms (reduced to 59p) and some onions in there too. We already had potatoes in the larder - when we were in Norfolk a couple of weeks ago we bought a dozen eggs and 5kg of potatoes from the campsite we stay on, they farm free range hens, and are the only remaining grower of the Norfolk Pink Potato and we paid just over £5 for what we bought.

The trick to eating fresh food economically is largely seasonality, and buying what is on offer also helps. We try so far as possible to buy British too - so sometimes pay a little more for things as a result, but that's our choice. Salads at the moment aren't including cucumber, as at this time of year it's perfectly possible to grow cucumbers in the UK, but our "regular" supermarket (yes, that one) are choosing to stock Dutch ones instead. You might remember that tomatoes are a bugbear of mine on this issue - we have an absolutely brilliant climate for them, and yet half the time all that's available in the supermarkets is those nasty little Dutch objects that looks like tomatoes but totally fail to either smell or more importantly taste like them. Search a bit though, and there are usually some British ones to be had. The same with Mushrooms - Sainsburys are excellent at sourcing UK grown for even their budget range, but only very recently have Tesco caught up with this. (Morrisons were ahead of this particular game years ago). The salad produce was mainly on "buy 2 for £1" deals, aples were bought loose rather than pre-packaged (nearly always cheaper), as were the bananas. Watch out for the bags of "Value" bananas - half the time you end up with more than you need, they're already very ripe, shortening their life, and the per kg price is often higher than loose ones too!

If you're struggling to afford fresh stuff, then choose frozen instead - most produce is now frozen so fast after being picked that it loses almost none of the nutrients. Tinned is - in my opinion - an absolute last resort - anyone telling you that it's "just as good" is I'm afraid to a degree at least hiding their head in the sand - at the very least produce for canning may have lost its vitamin C, and all to often most of its flavour as well. More often than not the water is is canned in also contains sugar & salt. If you're in any doubt, get someone to set up a blind taste test between fresh, frozen and tinned peas - I PROMISE you that you will have NO difficulty at all picking out the tinned ones! Whether they are cheaper at all is actually questionable too - the cheapest I can find is 20p a tin - and this gives a weight of 300g - but I guess that will be the undrained weight...I can't find the drained weight stated anywhere. A 1kg bag of frozen peas can be had for 99p, and I reckon you should get 12 portions from that. Realistically that tin of peas will only do 2 portions. Doing the maths suggests that actually, buying that bag of frozen peas will save you money! *(in the case of peas, nutritionists agree that frozen are actually better than fresh, unless those fresh peas have come from your very own veg patch, or have been picked less than 24 hours before cooking!)
Posted by Robyn at 10:18 am

Ah yes, the old ' I can't afford' debate! We're very much like you in that we eat seasonally, grow our own or buy British. If I haven't got it fresh I use frozen. I stocked up on frozen leeks and peppers when Farmfoods had their 3 bags for £2 offer on. We use lots of veg due to not eating meat or fish, and 3 large bags of frozen leeks for £2 were much better value than 3 or 4 'fresh' leeks for the same money. We currently have 8 rows of leeks down at the allotment and a couple of small rows in the front garden, so they should be ready by the time I've run out of the frozen!I'm busy at the moment making and freezing gallons of courgette and chili soup. I think we'll be glad of it's spicy warmth in the months to come - for more than one reason!