Living frugally can be about far more than just money. Being frugal with your belongings for example - treating them carefully, with respect, and doing repairs when needed to prolong their lives. Being frugal with your time too - making good use of it in order to 'get stuff done' without it eating into what for many people is increasingly hard-won leisure time.

Last Saturday morning we had to have a windscreen repair done on MrEH's car. Frugal in itself as his insurance picks up the bill. Even more frugal for me as we negotiated a deal where I waited in for the windscreen man while MrEH went to rugby training - my payment for this selfless act :-) was that my Sunday morning swim was paid for. Bargain! 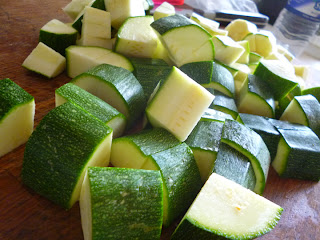 Having got a few small tidying, washing up, dishwasher-emptying type jobs done, I turned my attention to the kitchen. My weekly pre-shopping fridge check yesterday had yielded some courgettes that needed using, as well as some spankingly fresh ones donated by a good friend with a productive allotment. There was also lots of red peppers sitting there - while I wanted some for salads in the week, I knew I wouldn't use them all. The obvious answer was ratatouille - so when I shopped I had bought an extra couple of onions with this in mind.

Ratatouille is one of the most versatile vegetable dishes imaginable. It can be used as a side dish, ladled onto pizza as a chunky veg based topping, have mince added to be turned into "bolognese-ish sauce" and used in many other ways besides. It also freezes superbly, meaning it can be handy for those nights when you suddenly realise that veggies to accompany tea are limited to the last of a bag of frozen peas from the back of the freezer! My simplified versions runs thus:

Peel some onions, and cut into rough chunks. Pop into a large pan with a drizzle of oil and a pinch of decent salt, and cook until they have started to soften. 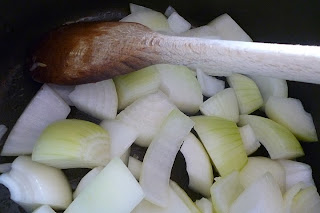 While that's going on, chop some peppers and some courgettes into rough chunks also. The amounts matter not a jot - although you may find it tastes more balanced with roughly double the quantity of each of the peppers and courgettes to onions. 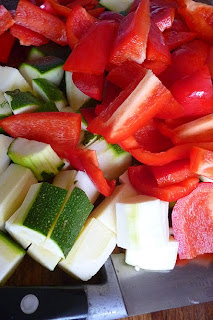 Once the onions are softening, throw in the other veg. Cook the lot, stirring often, until everything has started to soften and the onions have begun to turn translucent, then add one tin of chopped tomatoes and a carton of passata. 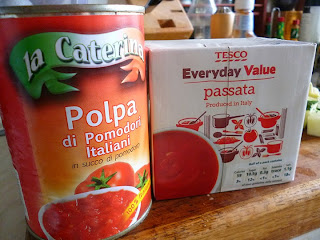 (You're aiming for the liquid to just come to the top of the veg - it doesn't want to be drowning in it). The can of tomatoes help to add a little texture. Grind in plenty of black pepper, and add some fresh thyme, savoury or even parsley, and a pinch of sugar, and cook until it's all heated through.

Ladle out into plastic tubs and freeze. Ta da! 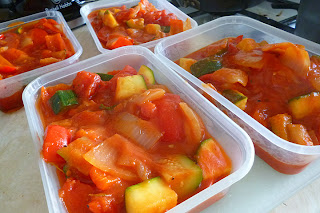 Your ratatouille looks delicious, it has never occured to me to use up courgettes this way! I'm increasingly wishing I'd planted courgettes this year, however I'll bookmark your recipe for future use, thank you. Enjoy the festival. x

I've been cooking up a storm with courgettes this week. I used up stuff in the cupboards along with some onions and carrots and have made 14 jars of courgette chutney - it's delicious, even before it's had a chance to mature! More courgette soup was produced too!

I lob courgettes into all sorts of things MG - although annoyingly we can't make them grow - they flower happily enough but the flowers just drop off without fruiting - we decided to give up this year.
Scarlet - Courgette chutney sounds wonderful - I miss living near the fantastic Walthamstow market when we always had lots of chutney ingredients available for pennies!