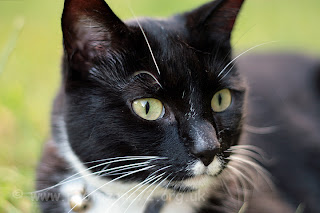 She came into our lives just a couple of months before we got married - a small furry black & white ball with razor sharp teeth & claws. Initially she spent much of her time curled around the radiator pipes in our old flat, apparently impervious to the fact that these were far too hot for us to touch! Not deterred, she proceeded to use up several more of her nine lives by - within her first few months, nearly getting flushed down the toilet (I grabbed her by the tail literally about half a second from disaster) and falling out of a first floor window. She also on one notable occasion stalked into the flat absolutely covered in diesel - naturally at a time when MrEH was out. Picture the scene - there I am with the cat in one hand, phone in the other to call the vets and say what should I do? The answer of course was "You'll need to give her a bath" which was rapidly followed up by Sharon at the vets saying "Ummm....do you think you'll be able to bath her? You might need to bring her in so we can do it - we've got more people to, well, hold onto her?!" Yes, her reputation had already spread far and wide! (That bath has NEVER been repeated either - we learn fast!)

This was a cat who learned her Green Cross Code at an early age - quite literally looking both ways before she crossed the road. The night our second cat, Muffin, died, she climbed onto my lap and refused to move, climbing back on each time I got up to make a cup of tea or do something else in the flat. When we first moved to Harlow she thought that all her Christmases had come at once - and for months we got an endless stream of mice, voles, birds, and even once a shrew. Her finest hour was the day she arrived back over the wall proudly carrying a still very much alive and flapping woodpigeon. It was a warm day and she shot straight into the front room with it before we could stop her. It took some time to clear the room of feathers, and it also took some time for HRH to stop strutting around looking smug...

Neighbours alternately considered her "sweet" or "spawn of the devil" depending on how likely she thought they were to feed her. When our lovely next door neighbours' (T & M) elderly cat died, she was triumphant over the local territory at last, but also wasted no time in taking up the empty space on T's lap, once again seemingly knowing that comfort was needed.

Sadly HRH will not be bringing home any more pigeons, and her 9 lives are now used up. We thank the person who was kind enough to - rather than just driving past the cat lying at the side of the road - take her to a vets to allow her final journey to be made in dignity. Also the wonderful friend who took the trouble to ring local vets this morning - this was how we knew what had happened.

So sorry to hear this, such a sad end to a well lived life. Losing a pet is always hard but to lose them this way must be awful but at least as you say, she was taken to the vet, not many would have done that for you these days. Hugs x

That's a lovely tribute Robyn. Sorry to hear about your loss.
XX

What a character and what a beautiful girl. Rest in peace HRH xx

What a lovely tribute to HRH, so sorry for your loss xx

That's so sad, but she had a good life by the sound of it.

So sorry to hear the news Robyn. She sounds like she was quite a character. xx

I'm so sorry to hear about HRH, Robyn. She was obviously much-loved and well cared for - and had a wonderful life - so I hope that can bring you some comfort.

Ladies thank you so much - your lovely comments - and that you've taken the time to make them - means a lot. She was indeed one heck of a character - the flat feels rather empty without her.

So sorry about HRH, I am glad that someone cared for her at the end. Your home will feel very empty without her. x

Alison, thank you. We are finding the fact that someone did care enough to pick up up to be a real comfort.

Oh WOW ... what a thirteen years they were!! It sounds like she knew how to live life to the full from day one.

So sad that she is no longer with you, as you know I know exactly what you are going through.

Thank you Sue - yes, I rather imagine pussy cat heaven has mice everywhere, only friendly dogs, and all the tuna they can eat! x