In the interests of wanting to do something "appropriate" on Remembrance Sunday, we headed into London to the RAF Museum. I've had this one on my list to visit for a while, and it did seem like the perfect day to do it.

We set off from home at 9am, taking the car to Epping, then jumping on the Underground into London, after 3 different tube trains and several long interchange walks through the stations, we made it to the museum grounds just as the gun sounded for 11am and the 2 minute silence - so stopped next to a replica Spitfire to observe it.

Those who watched the Royal Albert Hall Festival of Remembrance the previous night will have had their memories refreshed about this year being the 70th Anniversary of the Dambusters raid, and indeed a Lancaster Bomber is one of the highlights of the museum, looming large over the Bomber Hall. Almost more impressive though, to my mind at least, was the wreckage of a Halifax bomber which had to make a wheels up landing on a frozen Fjord in Norway in 1942 following being hit by flak whilst taking part in one of the raids on the Tirpitz. 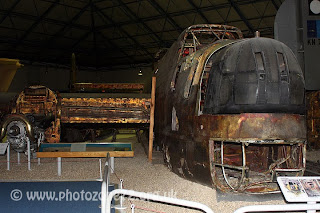 We'd made our way almost right round the bomber hall before we suddenly spotted another absolute highlight of the museum. Tucked neatly in one corner, "hidden", almost, is this... 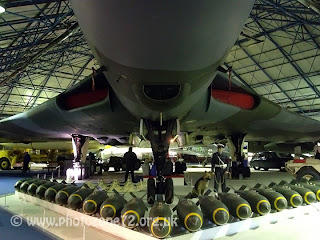 ...ridiculous eh, I mean, how on earth do you hide a Vulcan Bomber for goodness sake? They've managed it though - it really did take us completely by surprise when we spotted it! Better still, they have installed a TV screen in the Bomb Bay so you can sit right underneath the belly of the plane watching the short film being shown!

As well as the usual food outlets, the museum also has a large area where you can sit and eat your own food - we made use of this as we'd taken our lunch with us. It's a great area for people with children too as there are lots of interactive things for them to do while the adults are sitting down resting their feet! On the subject of interactive stuff, the museum also has two Flight Simulators - one - a flight with the Red Arrows - wasn't operating on Sunday, but the Flight in a Tornado one was, and was great fun - although you do get rather thrown about and have to hang on VERY tightly! I think it might be a more comfortable ride if you were harnessed tightly into a seat! Although entry to the museum is free of charge, the simulators cost £3 each to ride. We also bought a visitors guide for a very reasonable £2.95.


With planes from the very earliest bi-planes to a full scale model of the new Lightning II Joint Strike Force Fighter on display, there is plenty to see - and the Timeline of Flight makes fascinating viewing as it weaves the Milestones achieved in flight over a 100 year period with the history of each year. There is a complete hangar focusing on the events of the Battle of Britain, and an exhibition giving lots of information about the RAF's "Workhorse" - the Chinook helicopter.

Those outside London don't need to miss out as the RAF Museum has a second branch located at Cosford in Shropshire with a huge number of exhibits, simulators etc. We'd certainly highly recommend either as an interesting day out, and ideal for a cold, grey, wintry day as almost everything is under cover!

The RAF's London Museum can be found a short walk from Colindale underground station, just 30 minutes from central London on the Northern Line. It has a website giving further infiormation - see www.rafmuseum.org.uk 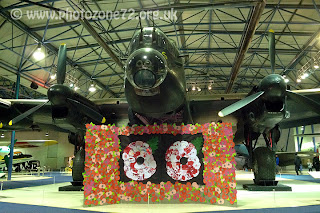 This looks like a very interesting place to visit. On special occasions we often have the Spits and the Lancaster flying right over us on the way to the Mall. Are you also on that flightpath? Late in the summer we also saw a Flying Fortress (US of course) when it flew very low over us. Fortunately I managed to get a pic.

Spits & Lanc generally turn ahead of us - although we did get the Red Arrows over the office (East London) when they were lining up to do one of the special Flypasts last year - they put their smoke on just after they'd gone over which looked rather good! The Flying Fortress you saw will be the "Sally B" - the last example flying in Europe currently - she's rather lovely! We get the odd nice thing over from North Weald OK - my Dad tells me he's forever seeing Army Apache helicopters at the moment!