#ShopLocalSaturday (Or Sunday, in our case!)

We constantly seem to see American phenomena taking off over here and getting "adopted into our culture" - from the legalised begging that Halloween has become, to the current interest in American Football when our very own rugby is available to watch on almost everyone's doorstep. One American "habit" that we could do far worse than take on board though happened this weekend, with "Small Business Saturday" being adopted over here for the first time with any degree of organisation. There has been a fair bit said about this elsewhere in Blogland and on twitter - try searching for the #ShopLocalSaturday hashtag. Team Pugh blogged about it too - you might already have seen their post.

We weren't able to shop on either Friday or Saturday this week, but went yesterday instead - having stopped off on the way to support another local small business which you can find mentioned here. From there we headed along to our favourite fairly-local farm shop - Calcott Hall, near Brentwood.  We've been shopping there occasionally for a number of years, but this was the first time we'd gone in aiming to do a full weekly shop.

I've commented before about vague feelings of guilt about the amount we end up using the supermarket. When we first moved here our local shopping area (about 10 minutes walk away) had a greengrocer. We would have been quite happy to have used it but sadly by the time we arrived the writing was already on the wall - quality was poor and stock levels were low. With no fewer than 4 large and countless smaller supermarkets in the town people simply found it more convenient to use those, instead. I'm happy to support local businesses but the quality must be right too - buying food which simply spoils within the time frame I need it for is pointless and I don;t have the time to shop several times a week. We do now have a good local butcher, and what bread we don't make ourselves mostly comes from Mayfield Farm Bakers. We have a farm shop in Harlow too - but so far whenever we have tried to use it it's either been closed, or has closed as we arrived.

So - Calcott Hall it was - and this is what we bought: 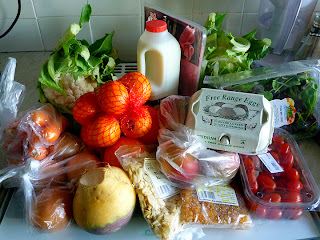 The only thing on my shopping list that we didn't buy was mushrooms - they only had dutch ones and we buy British. I prefer to buy British for all veg, but had to compromise this time on tomatoes and salad leaves - it not being the weather for either to grow well here currently. One of those cauliflowers has already been made into a cauliflower and pasta cheese too - two big dishes of it using some of our Good Food Show cheese haul, more on that in another post.

The total shop cost us £15.50 - which was honestly less than I expected, and probably not that different to what that lot would have cost me in the supermarket. With that in mind we have now decided that we will try to make at least one weekly shop per month "supermarket free" from now on. I appreciate that doesn't sound like much, but with a 30 mile round trip to shop there as opposed to the 6 mile (at the most!) round trip for the supermarket I use most often, but fuel costs and time considerations have to come into play.

Did you shop local this week?

I try to support small local businesses whenever practical and affordable. Like you we would rather have less of something of a better quality, having said that we don't have a lot of choice here. A small greengrocers opened but only lasted a year but I enjoyed it while it was there. This morning I bought paintbrushes from the family run hardware store and more "creosote" from a small builder's yard. I could have ordered both online a few quid cheaper but wanted to do my bit for keeping these local businesses open. If they closed I would have a 70 mile round trip to buy that sort of thing.
Unfortunately I can't avoid the small supermarkets completely as we have no alternative option to buy certain things from locally,

You've got me thinking there - we use an independant garage for car maintenance rather than the main dealers, and buy tyres from another local independant firm rather than the absolute cheapest option which would be to buy online.
We're fortunate in some ways that we have so much choice for many things - but that actually complicates things as well in a lot of ways. Our friends in the Hebrides see a trip to a "proper, big supermarket" as being quite a treat now - they stock up when on the mainland as most folk over there do, as there are some things that are simply too expensive to buy over there.
I agree with you about needing to keep the local businesses open - if only people had become aware of just how far things would go when Messrs T, S & A first opened their nice convenient doors!

We've recently got a new indoor market in town so we're having a go at using that for most food that we'd normally get in the supermarket. It does need more planning though as it's not open as late or on Sundays so it's not so easy to just 'pop in'.

Managed to get round three Christmas markets this weekend, with stalls from lots of local businesses so definitely did #ShopLocalSaturday&Sunday!

I must be honest and say I don't use the local shops nearly enough as the supermarket as well as being on my doorstep is cheaper and at the end of the day I need the money to buy food more than I need a small local shop. That said, the town I live in now has two gift shops and I usually go there first to try to get any gifts I need to buy. I also always use the local post office to buy stamps etc rather than the supermarket (although at this time of year with queues out the door my patience is tried!!) Farm shopping here in Glasgow is not nearly as easy to come by as in other places but I do try to support them if we are out and about and come across one.

Markets are wonderful - we used to love living in Walthamstow and having that fantastic street market under a mile away - the more you get to know the stallholders the better the deals get too - and we were incredibly grateful to them for helping us out when things were really tough financially. They're a loyal breed though and will help those who support them.
MG - I've been thinking a lot about the cost question. I was absolutely taken aback when I saw how little our shopping last week had cost - and honestly, I don't believe the supermarket would have been cheaper. As you say though if you don't have the options around you then that complicates things - my lovely friend on Orkney was saying that she would struggle to go supermarket free as there are so many things that can't be home produced up there due to climate (the Western Isles have a similar issue) and their shopping is set up to be supermarket reliant - although they do have decent sized co-ops which to me are a far better option than T, S & A!