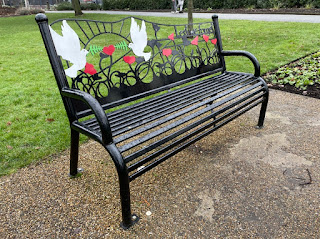 Well, that’s my jury service done and dusted! I attended last week one day which only ended up being the induction before we were all dismissed for the day - as I said in an earlier post. I thought I was returning the following day for a case, but got a call a couple of hours ahead to say that case had collapsed also! Then Monday saw another trip to the court - this time we got as far as jury selection but my name was not among the 12 called out, and so an hour after arriving it was back home again! Then yesterday afternoon saw a call from the jury officer to say that they were in a position to dismiss week 2 jurors. I did have the option to extend for another week - but due to the nature of the trials (both possibles were longer ones, and  the “subject matter” was mentioned as part of the brief summary description) I have declined unless they are really short on numbers. Allowing for how badly my coroners court experience 14 years ago affected me, I felt that probably I was not in the right place mentally to put myself through another “heavy” experience. Thankfully, Coroners experience plus being on my second stint of jury service does carry some weight in this instance and the lovely jury officer said that on that basis she was releasing me from service. 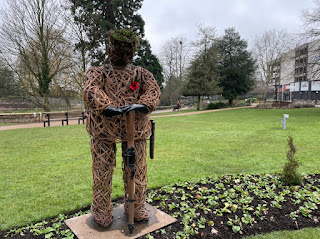 I’m glad to have been called again - partly because the timing was ideal with my furlough, and partly because it did mean that for a couple of days at least I got to go out, interact with other people, and actually feel a bit more sense of purpose. I feel almost as though it “reset” me a bit in some ways - perhaps because it coincided with the god-awful scaffolding being removed from the outside of the building here, and also that the evenings are now very distinctly starting to draw out. Either way, things suddenly seem to be brighter and rather easier to cope with. 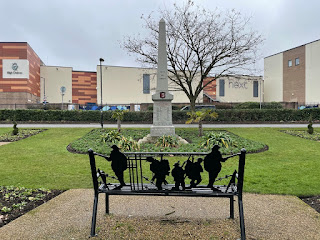 I also seized the chance for a short walk to kill some time before I was due to be at the court on Monday - a little way along the river, and past the rather fantastic war memorial garden as you can see from the photos. Clearly a lot of thought has gone into its planning - from the rather beautiful benches, to the woven sculpture of the soldier. Admittedly the backdrop of retail units isn’t the best, but it’s still a good effort.

So now, life returns to what currently passes for normal in this weird situation we still find ourselves dealing with. We’re now starting to tick off the “one year since” milestones here in the U.K. This time last year we were just starting to truly understand what we might be dealing with, although the sheer scale of it certainly took us all by surprise.

Email ThisBlogThis!Share to TwitterShare to FacebookShare to Pinterest
Labels: Essex, Me