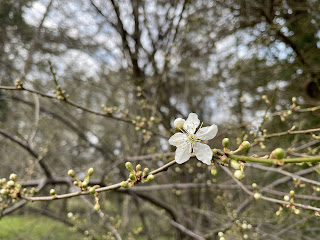 After several weeks of freezing temperatures, icy pavements in the mornings, and even a little bit of snow, it’s finally warming up. Today was a balmy 13°C and with the sun out at times it felt absolutely glorious after what has felt at times like a really long winter! 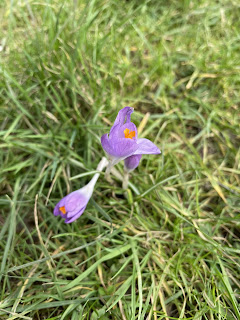 Outside this morning we noticed that some of the crocuses we planted years ago were showing their faces - a beautiful flash of colour in the grass. Then on our walk this afternoon we saw the first Blackthorn blossom of the year, and also Celandines - traditionally one of the first wildflowers that appear each year - absolutely everywhere! 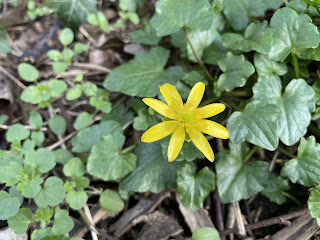 We’re also seeing - and hearing - masses more birds. Our local Blue Tits have clearly paired off - and my suspicion is that the two Robins we see regularly on the feeders - nicknamed White-flash for the white wing feather, and Flappy Robin (struggles to balance in the feeder without using one wing for balance!) are a pair too, and are nesting in the bushes just across from us. We’re also seeing a pair of Red Kites around a lot which is fantastic - we have seen an occasional one around for a few years now but it looks like these two have settled in. I managed to get some photos of them flying a few days ago so I’ll do another post with some of those at some stage. 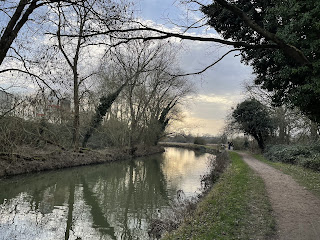 Today’s walk was a favourite route of ours - along the river. The light was wonderful and the reflection of the trees in the water really rather beautiful.  Also rather beautiful is the way the days are lengthening now - we got back from our walk today in broad daylight at 5pm, and there is still an appreciable amount of daylight in the sky an hour later than that, too. I always forget, from year to year, how special that first proper glimpse of Spring on the way feels!
Robyn
Posted by Robyn at 8:32 pm