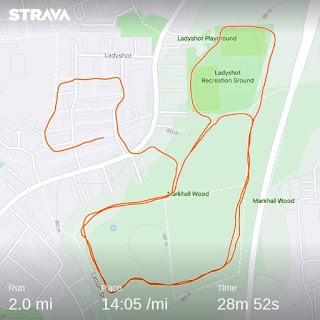 Couch to 5K - week one, run 2. Run 1 happened last week. The foot is...improving, but not yet fixed, however, I reached the conclusion that not running wasn’t actually making it improve any faster. Things that *were* making it improve faster were less total mileage, more foam rolling, and anti inflammatory gel. So a plan was formed. Reduce my walking on weekdays - I’d been doing anything up to 8 miles most days and even more sometimes, so that needed to come down. The foam rolling is painful but necessary. The anti inflammatory gel 3 times a day is by far the easiest part of this whole procedure!

Last Tuesday morning I put on my comfiest, most cushioned running shoes (yes, of course I have several different pairs - ask another runner, they’ll explain!) started the C25K app, and reminded myself that the plan here relies on me sticking to the plan. That means only running when the app tells me to run, and keeping the pace slow on those intervals. It also, at the moment, means slowing things down rather overall - the programme usually relies on 3 runs per week but at the moment I plan to cap it at a maximum of 2. Eventually I’d like to get back to a more consistent, regular pattern, but for now it’s about building things back slowly and being prepared to step back again if things with my foot seem to be getting any worse again.

This morning I walked three miles with MrEH, then came back, switched shoes and got out there for run 2. I opted for trail shoes this time as I was planning my route to be through the woods and round the field - but those are also less cushioned and proved to be a bit of a mistake. I also assumed that the more uneven paths through the woods would help with the slower pace thing. Ummm. No, not so much - that still needs work. It WAS way more fun than just running round the roads though, so until I can get a bit further afield a bit of mud clogging up my road shoes and needing to keep a close eye on my watch for pace is stuff I’ll happily put up with.

At the moment, it’s hard work. Really hard. You lose running level cardio fitness quite fast when you can’t run, and my last run was Christmas Day. It also builds back again quite fast though, so I know it will get better. I’ve also run the programme before of course, so I know that if you stick to it it works - although my reduced number of runs are very likely going to mean some repeated weeks, but that’s fine too. Slow and steady - no speedwork, no long runs, stay patient and do the work. Just being back out there again is beyond brilliant though - being injured sucks, particularly at a point where you REALLY need running for it’s mental health benefits. And even when it feels tough, those benefits are still very much there. And THAT is why doing the work will be worth it!

Email ThisBlogThis!Share to TwitterShare to FacebookShare to Pinterest
Labels: Fitness, Me, Running