Monday 29th March saw the much awaited first significant easing of Lockdown in England, with the “Stay Home” rule being dropped, and recreational travel allowed once more. As always, word of mouth reporting and “he said/she said” rhetoric has caused some confusion, with individuals claiming that there is still a rule in place that people must stay local and that this is not due to change until early April. In fact the government website makes it clear that further to Monday there is no further easing of travel restrictions to be made - the only further significant change of this type being the ruling that you can stay away from home with your household from 12th April - something we are planning to make good use of, but more on that another time!

The rule change meant that Wednesday saw me able to head down to Runnymede in Surrey. The Red Arrows were making a flypast over the Air Forces Memorial to commemorate the Centenary of the Royal Australian Air Force and I decided that the National Trust parkland down there would be nice to combine a bit of a walk and an explore of an area I’d not visited in years, with a sighting of my favourite little red jets! The weather sadly wasn’t the best, but I had a thoroughly enjoyable few hours wandering round, looking at artworks and memorials, climbing hills and finally getting a quick look at the jets as they roared overhead.

Thursday was another trip out - this time my first visit to a Scampton in almost 6 months. Thinking about it, I reckon this is my longest gap between visits since February 2014! The weather, again, didn’t quite play ball, although the third flying slot in the afternoon did finally deliver a snippet of blue sky here and there...

...one fully flat and two at least part rolling displays though, and frankly I was just delighted to be out in the open (and it must be said, quite cold!) air, to see Claire for the first time in an age, and actually get some quality time with my camera, too! 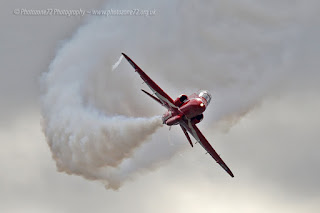 And of course, this view just NEVER gets old! I’m trying to work on some new techniques for shooting the individual jets like this - but it will require a bit more time to really work on I think - hopefully might lead to some different perspectives from the shots I have got previously once I’ve spent some time working through angles and methods though!

It feels so nice just to be back to actively planning things again - after a full year and more of having been reluctant to really plan much because of the near certainty of disappointment when cancellations happen, starting to get some dates in the diary again feels great!