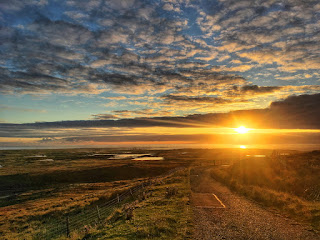 A highlight of our week away was centred on some news from rather a long way away from Cornwall - in fact rather than the extreme south-west of England, this referred to the extreme north west of Scotland. With lockdown easing happening across the UK, many in the Western Isles, Orkney and Shetland among others had been bitterly unhappy that while everywhere else was being given at least a rough “roadmap” around what was predicted to happen with travel in their areas, on the subject of travel to Scottish Islands all that was being heard was a deafening silence. t one stage the suggestion was made that the islands could have an earlier relaxation of restrictions around the hospitality industry in exchange for a delayed return to travel - unsurprisingly it was somewhat sarcastically pointed out that there is precious little point in being able to open hotels etc if nobody is allowed to travel to use them... Many island accommodation providers were experiencing existing bookings cancelling in their droves as people, unsure whether they were going to be able to travel, opted for a mainland holiday instead. We were facing similar uncertainty, but fortunately were in the lucky position of being able to book the Cornish trip in part in case our planned Hebrides visit was unable to go ahead - many others aren’t in that position.

Finally, last week, an announcement was made by the First Minister that on 26th April all travel restrictions would be removed - between Scotland and England AND between mainland Scotland and the Islands - a huge relief not only to us and many others with trips booked, but also to the huge number of islanders who rely on visitors being able to actually visit to keep their heads above water.

From our perspective, having just returned from one holiday we’re now in the slightly odd position of preparing for another one! It feels rather decadent, but we’re refusing to feel guilty about it - booking the Cornish trip was absolutely the right thing to do, and we had a fabulous time. The last year has been ludicrously tough for almost everyone, and us as much as anyone else, and it definitely feels like the right thing to do to ensure that we grab chances to do stuff now while we can, in part to make up for all the disappointments of so much being cancelled previously. In other “things to look forward to” plans, I have also started getting some more airshows booked - Max and I are teaming up to do another Shuttleworth show, and I have also booked an event at Duxford as well as taking out a years membership there. I’ve got a few more shows in mind to book too, although it does seem unlikely that many of the big seafront shows will go ahead this year.

Here’s to future plans then - at this rate I’ll need to buy a diary!