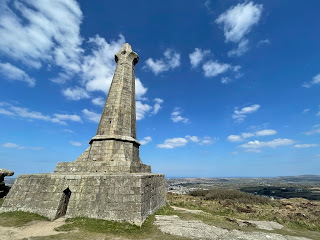 Saturday was inevitably always going to be a slightly odd day. With the funeral for the Duke of Edinburgh happening in the mid afternoon, and us both not exactly “wanting” to watch it, but feeling as though it was too historically significant not to, as well as being somehow respectful, we took the decision to get out fairly early to be able to pack as much into the earlier part of the day as possible. 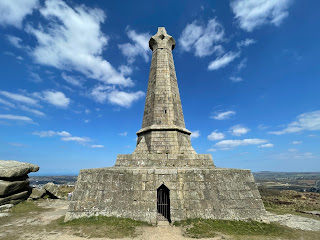 First stop was a favourite spot - the Basset Monument at Carn Brea. We tend to park down just outside Carnkie village and walk up - it’s a nice, if uneven walk, and a fairly gentle way to cover the 300ft of climb to the top. It also has truly stunning views almost all the way up, but when you get to the top you can see fully to the sea across Redruth and Camborne, just beautiful! 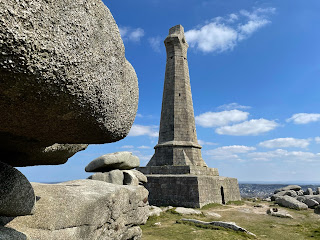 From there, we headed to Ponsanooth, where, in a little unit tucked away behind a rather impressive railway viaduct the Dynamite Valley Brewery can be found. During our week we’d made efforts to track down plenty of good Cornish beer from various different breweries, but the Dynamite Valley Black Charge that we bought a bottle of from the village shop in Coverack stood out as something rather special. It also came with a voucher for a free half pint of beer at the “Beer cafe” at the brewery, which just happened to have its first day reopened since lockdown on Saturday...! 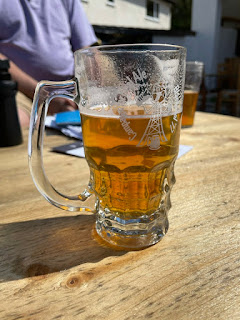 So we had some beer - just the half pint for me because I was driving, but MrEH sampled one of each of the three beers they were serving. And then, because we needed to eat somewhere, and the offerings from “The Aussie Smoker” on site sounded rather outstanding... 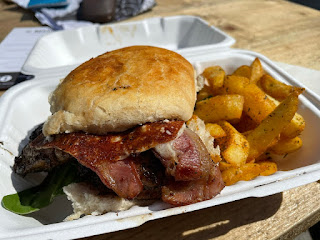 As you can see, they didn’t disappoint, either! That is chicken, cheese, bacon, spinach, and some rather incredible barbecue sauce stuffed into a tasty roll, with truly excellent seasoned fries. Well worth the £10 price tag, and I for one was completely stuffed when I (finally!) managed to finish mine! We also left the brewery having purchased two cases of their beer, which will help to keep us going for a while back at home.

From there it was back to the house to turn on the TV and be ready for the National minute’s silence at 3pm. It was strange, honouring that while looking out over a beach with children and adults playing happily, although I was pleased to see that it did quieten down noticeably in the run up to the silence. In common with the majority of the country I found the sight of Queen Elizabeth sitting alone in the chapel heartbreaking - it’s impossible for almost any of us to really understand quite how bereft she must have been feeling, with the man she had loved for over 80 years no longer by her side. Sad also that she was unable to receive the comfort that her children in particular must have been quite desperate to give, due to the restrictions still in place around Covid. I’m sure though that she would be the first to say that it is no more than so many others across the country have gone through in the past year.